Innovating from Within: Leaders from ADP’s Studio 55 on Taking Chances and the Power of Shared Values

Imagine transforming a decades-old services company into a technology company ready to serve 1 in 6 Americans. Chris Lavender, Senior Director of Application Development, and Mike Ruangutai, VP, Product Development, had a chance to do just that as part of ADP’s innovation center, Studio 55.

The small, dynamic team powers every part of ADP’s offerings—from payroll to compliance—and is ushering in a new technology platform to serve more than 800,000 ADP customers across the globe. The teammates discuss the impact of their work, their shared love of music, and how strong collaboration will power the future.

When Chris Lavender first got a call about joining ADP, back in 2017, it didn’t seem like the obvious choice. After starting his career in music, he’d spent six years as a developer, engineering manager, and CTO at small and medium-sized startups—a far cry from a 70-year-old company with more than 59,000 employees.

“The stakes were really interesting to me,” he remembers. “I get excited about solving problems that have a massive impact. When you’re that big, though, transitioning from a service company to a technology company is like trying to turn a giant ship. You definitely can’t do it alone.”

Chris considered the opportunity at ADP because he already knew several people on the team—including Mike Ruangutai, who first reached out. The two had worked together several years prior, at a medical billing startup called Kareo, and had stayed in touch ever since. Now, Mike is VP of Product Development at ADP and one of several former Kareo employees working for Studio 55, ADP Pasadena’s in-house innovation incubator helping support the company’s transition to tech. Mike had joined the company a few months earlier, and, like Chris, he’d been well aware of both the challenges and the opportunities facing the team.

“From an engineering perspective, ADP is the perfect petri dish. We have enough resources to experiment with new technologies and build our ideal ecosystem without worrying that any decision we make could be a company-killer,” Mike explains. “And because it didn’t start as a tech company, there’s plenty of fertile ground. There are lots of decisions yet to be made.”

As for the challenges? “Inertia,” Mike says. “Everyone has agreed this is the right move, but that doesn’t make it easy.” When he and Chris started talking, some of the team’s technology was decades old, and many of its practices and processes were in dire need of updating. To make the transition, they needed more people like Chris. “Chris is a unicorn. He’s a great technologist, but also a great leader,” Mike says. “To build an exceptional technology company, that’s who you want on your team.”

Months earlier, when Mike was deciding to join ADP, he’d asked former Kareo colleagues who’d already done so for their unvarnished view of the company. “I asked them, ‘What are you seeing?’ ‘What do you hope to achieve?’” Now, he set out to answer the same questions for Chris.

“Mike and I have always had a really open, frank relationship, so I knew I could trust him to give me the full picture,” Chris says. “There was no sugarcoating whatsoever.”

And the same was true when Chris met with Mike Plonski, ADP’s SVP of Product Development and the head of Studio 55. “We spent more than an hour together, and he was not messing around—it was almost like he was trying to convince me not to take the job,” Chris laughs. “He wanted to make sure I didn’t have some glossy view of things. That transparency was super attractive.”

So with a clear view of the work he’d be doing—and the support he’d have in the process—Chris decided to accept the position.

“It was a leap of faith. I lived really far away at the time, so I had a serious commute at first,” he says. “But I knew Mike and I worked well together, the footprint was huge, and the problems were really interesting to me. From a technical perspective alone, government compliance is a famously tough nut to crack. On top of that, we needed to change the processes, the flows, the culture. We needed a complete mindset shift.”

Nearly three years later, Mike says Chris has helped lead the Studio 55 team through just such a shift. “The energy is palpable. There’s a ton of collaboration,” he says. “Teams walk across the aisle to talk with one another; they have lunch together; they problem-solve together.”

One key component has been a shared set of values. “I’ll say it until the cows come home, but it’s really important to me: The team comes first,” Mike says. “We have to help each other be successful—and that includes leaders. It’s our job to set the context, support our team, and then get out of the way.”

For Chris and Mike, that leadership style is informed, in part, by another shared value: their love of making music. Mike studied studio jazz guitar in college; Chris holds a master’s degree in composition, improvisation, and technology, and he also spent a year performing with the Blue Man Group. “Composition and software engineering have so much in common,” Chris says. “You’re creating in the abstract and bringing that into the real world. It’s the same muscle.” 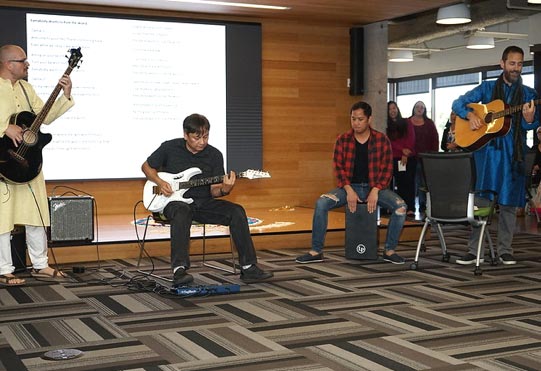 Mike, too, sees the parallels. “An engineering sprint or scrum is like the drumbeat, the tempo. Then everything else layers on top of that—our product ideas are the licks and motifs we experiment with; the technologies we use are the notes. And just like you need brass here and strings there, you need different groups of engineers. Watching a team come together on a project is like watching a group of musicians adapting, feeling the groove.”

They’ve found some other kindred spirits on the Studio 55 team, as well—enough to put together a weekly after-work jam session. “We’re super informal, no audition,” says Chris. “It’s just a good way to exercise our brains and use them in a different way.”

That brainpower will no doubt come in handy over the months and years ahead, as Mike, Chris, and their colleagues continue to work through the challenges that face their team and the rest of ADP. “There’s still some work that needs to be done across the company—we watch carefully for any evidence of silos forming, for example, and strive to get ahead of that,” Mike says. “But Chris and the rest of the leadership team have really moved the needle. Now it’s about nurturing that headway and leveling it up even further.”

Chris agrees. “We’re still turning the ship, but it’s definitely happening. We’ve made insane progress in just a couple of years,” he says. “We have teams working cross-functionally, communicating, getting problems solved—and doing it efficiently, without staying up all night or working on weekends. It’s been really gratifying to see.”