Time clocks in the age of COVID-19: How ADP developed a (mostly) touchless solution in just a few weeks

Pandemic, Innovation, Voice of Our People

In early March 2020, as the COVID-19 outbreak started to expand throughout the U.S. and Canada, the team working on ADP’s new Time Kiosk system started getting the same question from many of our clients: “Is there a way to use this without touching it?”

In early March 2020, as the COVID-19 outbreak started to expand throughout the U.S. and Canada, the team working on ADP’s new Time Kiosk system started getting the same question from many of our clients: “Is there a way to use this without touching it?” At the time, we were several months into a pilot program for the tablet-based timecard management app with more than 1,000 clients.” But most of them hadn’t adopted the app’s facial recognition feature, instead opting to tap in their badge number. And even for those who did use facial recognition, Time Kiosk still required each worker to tap the screen—a suddenly dangerous proposition during a global pandemic.

For companies that had essential workers on-site, we suggested an immediate but imperfect solution: low-cost touch pencils each employee could use to navigate the app. But we knew we’d ultimately need an integrated, turnkey option—and we’d need it as soon as possible.

After a quick brainstorm, we narrowed in on the fix that seemed most promising: First, we’d reconfigure the app to perform facial recognition by default, whenever someone was in front of the camera. Then, we’d use the tablet’s built-in virtual assistant, which powered features like Siri and Google Assistant, to respond to voice commands within Time Kiosk. If we were successful, employees would be able to start a workday, take lunch and other breaks, and clock out, all without touching the screen. 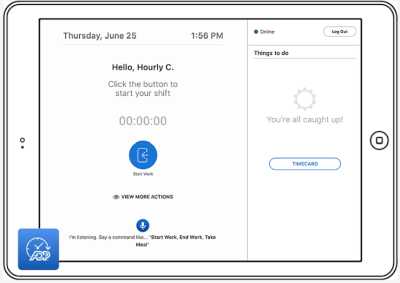 Within a couple of days, our developers were able to build a rough proof-of-concept. It was clunky and far from intuitive—to clock in, for example, you had to say “tap clock in” instead of simply “clock in.” But it was enough to help our senior leaders understand our vision for a more-refined solution—one that would meet the high standards we’d set for the original Time Kiosk experience. We got their buy-in and started to build.

Voice recognition was the first challenge. For one thing, as anyone who’s used a virtual assistant knows all too well, there are phrases it just won’t recognize. Also, in order to release the touchless features as part of Time Kiosk’s formal launch in both the U.S. and Canada, which was just a few weeks away, we needed to develop voice recognition for not only English but Spanish and French, as well—languages no one on the team speaks. Thankfully, as a global company, our partners from other ADP teams came to our rescue, helping us quickly create a repository of words to which the tablets would reliably respond.

Of course, we couldn’t make every action completely touchless. Switching between an employer’s custom job or department codes, for example, would require an employee to scroll through options that voice recognition likely wouldn’t cover. But what we could do was keep people informed. With the help of our UI team, we developed a treatment to add an icon for every touchless function, so employees could see at a glance whether they’d need to touch the screen. If so, they could wash their hands or take other precautions before they acted.

Once we’d finished the first phase, though, we came to a larger challenge: quality assurance. We spent twice as much time testing the new touchless features as we’d spent building them, going through every single action a user could take to make sure we’d identified everything properly. Because voice recognition touched the entire product, we had to review it all—and quickly, requiring a true team effort from QA. What’s more, we happened to be in the middle of transitioning to a new UI, so we needed to test both the current and the incoming interfaces, making the process twice as long.

Yet perhaps the biggest challenge of all was the pandemic’s impact on how it got done. To make sure the new features worked well in all three languages, we needed service reps and tech partners to help us with testing. But most of ADP’s 58,000-person team was working from home. I couldn’t simply walk upstairs, hand someone my tablet loaded with the latest version of our work and ask them to play around with it for a while and bring it back at the end of the day. Instead, we had to find a way to get it on their tablets remotely—no easy task given the tablet’s security restrictions. Luckily, our team was able to build a package and set of instructions that I could share, allowing partners to offer live feedback via an embedded diagnostic tool. They were invaluable in helping us fine-tune, especially our translations.

In the end, thanks to the hard work of everyone on the Time Kiosk team and many of our colleagues, we were able to meet our goal, transforming the app into an intuitive, mostly touchless experience in a few short weeks. Like any quick-turn project, it wasn’t without a few bugs. But the team’s rapid response to client questions and weekly Q&A calls have helped us not only serve their needs and build stronger relationships with them. Time Kiosk has now officially launched, and our sales teams tell us the touchless technology has been a conversation driver with both clients and prospects. 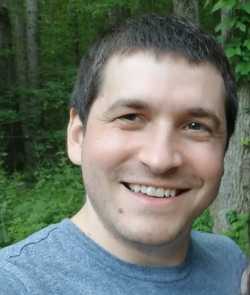 Even after the COVID-19 outbreak has passed, we see great potential in what we’ve learned about voice and facial recognition, whether it’s better accessibility for employees with disabilities or voice biometrics for authenticating service calls. In the meantime, we’re proud to say that when our clients had an urgent need, we were able to quickly deliver a solution that works—and that’s helping keep thousands of their people safe.

Jonathon Gumbiner is a Senior Product Manager at ADP in New Jersey.

I’m a start-up founder and angel investor, and here’s why you should...
Scroll to top