We decided to open the first lab in Porto Alegre, Brazil, with a specific goal: to develop new products as quickly as possible.

After starting his career as an entrepreneur in Brazil, SVP of Innovation, Robert Masiero first came to ADP 20 years ago through an acquisition—and he’s been building new technologies here ever since. Below, he reflects on what led to the founding of the ADP Innovation incubators in Brazil and the U.S., explains the beliefs that shape his leadership style, and shares the cutting-edge challenges the team is taking on next.

First, tell us about your background and what brought you to ADP.

I started working in technology while I was in college as a mainframe operator on the overnight shift. I didn’t get much sleep! After that, I learned to code and became a developer, then did mainframe support. I had this urge to start my own business—and I did a few times. The first two failed, but the third one, a consulting company that transitioned applications from mainframes to open systems like Linux and Unix, did well. Eventually, we decided to create our own software for things our clients needed, things like HR, payroll, and accounts receivable.

That software went through several iterations, from character-based to client-server, Windows-based to the web. That was the mid-90s, and it was unusual to have software that could run in a browser, so large companies started showing interest. We added team members, but eventually, our product outgrew our business—we needed to expand our sales force, distribution support, and ability to do on-site implementations. At the time, there was no venture capital in Brazil; your only options were getting a bank loan or finding a partner. So we started going to trade shows. At one of them, we knew ADP would be two booths down from us, so we made sure to get their attention—we had this big TV screen showing all our client logos, many of which were also ADP clients. That started a conversation, and ADP ended up acquiring the business.

What was it like to integrate into such a large company?

I remember thinking we had a massive opportunity to succeed because, back in those days, ADP had mostly manual processes—people called or faxed in their payroll. So, in our first six months, we took the software we’d built for our clients to use and built a layer on top of it that allowed ADP to run things on a client’s behalf. We were just this tiny new acquisition, and ADP was very conservative at the time, so when we presented the updated software we’d created, I wanted to put on a big show. I rented a hotel ballroom, even though I didn’t have the budget for it, and I invited the entire leadership team.

They gave us a couple of large clients, and that turned out to be transformative. After a while, ADP shut down their mainframes in Brazil and moved those clients to our software—including GPA, which is like the Wal-Mart of Brazil, and the largest single payroll we ran globally. The complete transition took a few years. When we were done, ADP’s U.S. leadership team sent their CTO down to take a look; I think they weren’t quite sure it was real. But he liked what he saw—clients were happier, costs were down—so they invited me to move to the U.S. and adapt the software from a new tax credit services acquisition.

You started the first ADP Innovation Lab around that time. What led to that one—and the second lab?

We decided to open the first lab in Porto Alegre, Brazil, with a specific goal: to develop new products as quickly as possible. At the time, I was more familiar with the talent there than in the U.S. In Brazil, I could build a team of people I already knew, who were already familiar with the technology we wanted to use. So, ADP’s primary development team handled payroll, while we had a small team that focused on the tax credit work.

After the project was over, ADP invited me to run a Shared Services team of 700 people who handle identity management, the enterprise service business, and our internal associate portal. Then I moved over to Enterprise Architecture for a while. But I still had an entrepreneurial drive. About a decade ago, I went to ADP leadership and said I wanted to build an Innovation Lab here in the U.S. to focus on incubating completely new ideas. They said, “Okay, let’s do it,” and they gave me a team of four to get it started. 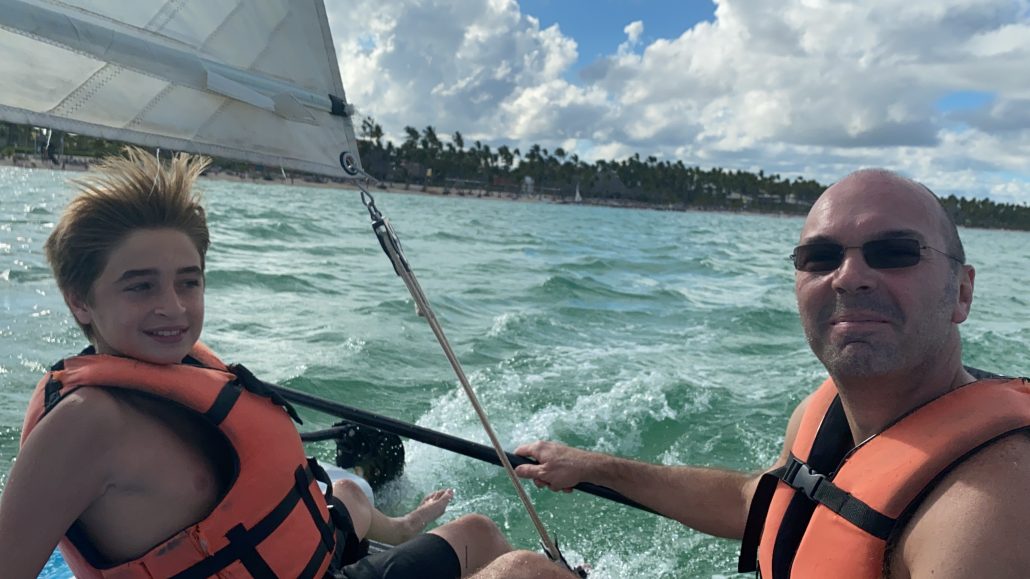 Tell us about some of the projects that the lab has developed.

We launched around the time the iPhone came out, so our first project was ADP Mobile. We put it together in about a year, and we used modern database tools like MongoDB rather than the Java- and Oracle-based ones that were typical at the time. We also built it for everyone; small businesses and multinational corporations could use it, and it worked in every country and supported 40 different languages. It grew very well—I think we reached a million users in less than a year. But I’d said from the start when we created that lab. I wanted to keep it small and flat, never more than 30 people, which meant when a project reached a certain level of maturity, it would “graduate” from the lab and get a dedicated R&D team. That’s what we did with mobile, which now has something like 25 million users.

After that, we worked on the tablet application and then built out semantic search, which we now use across ADP’s core products. The most recent project that graduated from the lab is ADP Marketplace, a collection of HR solutions that clients can customize and integrate with our software. The latest product we developed is called Roll™, which required an entirely different way of thinking about our services. Roll™ is a 100% mobile chatbot platform that simplifies payroll using state-of-the-art AI and natural language processing technologies. It can intelligently alert a client when something needs their attention—it’s an unprecedented level of automation.

What do you think makes a good leader?

In part, I think it’s about completely understanding the work your team is doing. When you’re running a large organization, of course, it’s also about who you put in charge—you have to trust your direct reports to make the right decisions. But even when I was leading hundreds of people in Shared Services, I still wanted to be familiar with the processes and skills they needed to do their jobs.

I never want to micromanage, but I do want to be hands-on and in the know. It’s leading by example—if there’s a production issue, for instance, I’ll be on a late call with the team. People appreciate it when you’re committed to their ideas, and they can trust you to have an educated conversation about the decisions that need to be made, whether that’s around technology or go-to-market strategy.

A good leader also ensures everyone on the team has a voice, whether they have ten days of tenure or ten years. In fact, the untrained eye of someone who’s starting their career can be a phenomenal asset to the rest of us. If you have an opinion or see something we could do differently, it’s so important that your input be heard and considered. Ultimately, we have to be pragmatic in our decision-making, but I love debate. I love being challenged and being proven wrong. The push and pull from many different perspectives makes this work fun.

What’s challenging about your work?

The toughest thing for any leader is making difficult decisions that affect other people. If you’re letting someone go, for example, even if it will be healthier for everyone involved, that’s very hard.

ADP’s size can also be a challenge because change is difficult for any big company. But I see that as an opportunity: If something has been done the same way for decades, let’s ask why. How could we change that process to make it more efficient? ADP is exceptionally open to challenging the status quo. Our people have the incentive to challenge existing ideas and revisit how things are done to find opportunities to improve or design for better outcomes. Just as I like my team members to challenge my assumptions, we get the same message from the very top of the company: If you see a better way, a chance to transform the way you work, you should be able to do that.

What’s exciting to you about ADP’s future?

I’m excited for us to continue investing in new ideas to make the lives of our clients and ADP associates better. We’re going through a period of significant change, and that’s never without challenges. But the level of commitment I’ve seen keeps me hopeful. We’re doing our small part in the lab with products like Roll™, and that’s just a portion of a company-wide effort to deliver on new technologies and innovations. All of us are committed to success and meeting our clients’ and associates’ expectations with innovative products and technologies that will have a phenomenal payoff and carry us through many years to come.

Tashina, VP of Operations & Digital Transformation, shares her journey and...