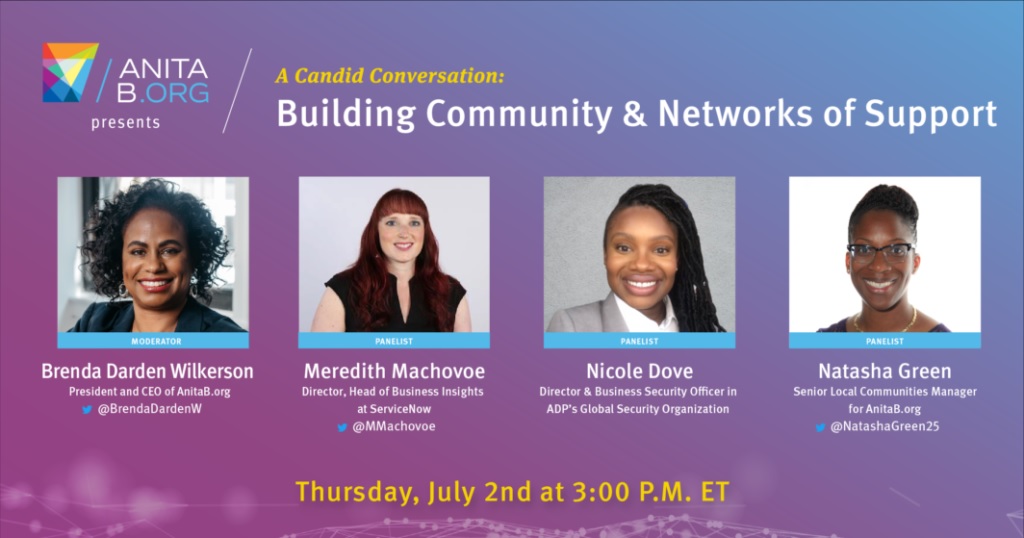 Brenda Darden Wilkerson is an advocate for access, opportunity, and social justice for underrepresented communities in technology. She currently serves as the President and CEO of AnitaB.org, an organization that connects, inspires, and strives for greater equality for women technologists in business, academia, and government. She founded the original Computer Science for All program, building computer science classes into the curriculum for every student in the Chicago Public Schools, and serving as the inspiration for theObama administration’s national CS4All initiatives.

Meredith Machovoe has spent the last 16 years leading diverse teams in data analytics & data science fields.  She is currently Director, Head of Business Insights at ServiceNow.  In her career, she has worked across many areas within data analytics and science, beginning in the North American banking industry and then transitioning to the Silicon Valley software industry over 9 years ago before joining ServiceNow last fall.  Meredith is originally from Lancaster, NY – a suburb of Buffalo – and holds a master’s degree in Mathematics from the State University of New York at Potsdam.  She currently resides in the Bay Area.

In her role, Meredith is responsible for delivering in-depth analytical studies aimed at answering strategic business questions, often to understand key levers for growth and acceleration of the business.  These studies are key inputs to business decisions and actions.  Her passion is in teasing out these strategic insights from data and constructing the story around them, bring in other aspects of the customer experience.  She believes an insight without action is meaningless, which makes the delivery of these insights crucial.

One of her favorite parts of her role is that she gets to develop and grow diverse talent from many educational and cultural backgrounds.  Meredith is a passionate advocate for women in technology, mentorship and seeks to inspire others to participate in STEM fields.   She has been an avid supporter of women in technology at ServiceNow, partnering with other female IT leaders to create a Women-in-Tech speaker series and has recently given talks on Work-Life Balance, Authentic Leadership and Perfectionism.

Nicole Dove is Director & Business Security Officer in ADP’s Global Security Organization where she is the executive partner responsible for the cybersecurity portfolios of business units that provide services to over 600,000 US based clients representing over $6B in revenue. Before working at ADP, she held consulting and risk management strategy roles at Goldman Sachs, PricewaterhouseCoopers and Rockstar Games where she did voiceover work on the Guinness Book of World Records best-selling video game title Grand Theft Auto.

Nicole is one of two SE Regional Directors for Cultivate, ADP’s first Business Resource Group, and recently completed her tenure as Overseas Engagement Leader for the International Women’s Inclusion Network.

In 2015, Nicole lived and worked in Bucharest, Romania leading innovation projects for ADP’s newest Offshore Center of Excellence, and in 2016 was invited to – and attended – the White House Summit on the United State of Women alongside President and First Lady Obama. She was also one of two associates selected to represent ADP in Malawi with Habitat for Humanity to participate in a global village build, where she partnered with residents of a remote village to build sustainable housing.

Outside her leadership roles within ADP, Nicole hosts the Urban Girl Corporate World podcast which has listeners across six continents and has featured a former White House Senior Advisor, co-president of the Harvard University Student Community and Theater organization, executives from Amazon and IBM, a Dubai-based Technology & Innovation Leader and social entrepreneurs as guests.

Nicole has also hosted workshops and served as keynote speaker for Yale School of Management, Rutgers University, Deloitte Consulting, Goldman Sachs, INROADS, MLT, Women’s Empire, United Negro College Fund and many others. She holds both CIA and CRMA certifications and is a proud graduate of Clark Atlanta University.

Natasha Green is an educator, entrepreneur, and advocate for school counselors, and women in tech. Raised in the Bronx, NY Natasha was raised to always value education, and throughout her life, that’s what she’s done. In high school, she was a part of the honors class and always excelled in math and science. While attending college on an athletic scholarship, she received her Bachelor’s in Chemistry, went on to get a Master’s in Mathematics Education, Master’s in Education Leadership, and the most recent one a Master’s in Chemistry with a focus in Computational Chemistry.

In 2003, Natasha started investing in personal development courses. One seminar she attended left a lasting impression on her and opened her mind to the idea of entrepreneurship and eventually intra-preneurship. While working for and alongside others, she noticed that she had a passion for creating opportunities for others while also helping people unlock their potential. Over the years that’s precisely what Natasha has done.

In 2005 she created her first Non-Profit organization, Hidden Gems Inc., an organization that creates athletic and academic opportunities for youth and adults in urban communities. In 2008, she received her first grant to bring archery to NYC public schools. This endeavor led her to have a for-profit business in 2013 called Hidden Gems Archery LLC (HGA), a company that goes into urban neighborhoods to introduce people – young and old, to the sport of archery. This is one of many situations where Natasha built up a community to ensure opportunities were accessible to those who wanted them.

Currently, Natasha is the Senior Local Communities Manager for AnitaB.org, where her job entails: 1) Creating events for women in tech alongside the 50+ special projects and city volunteers residing around the world; 2) Implementing monthly Diversity, Equity, and Inclusion events to allow Male Allies in leadership to obtain the information they need to improve their workplace cultures so that ALL employees feel like they belong; and lastly, 3) Leading the 14-week Code With AnitaB.org free coding program that gives women access to mentors, accountability partners, and a curated coding curriculum to learn to code.

As a self-proclaimed mobilizer of groups of people towards a shared vision, Natasha’s goal is to leave individuals with the impression that they have the unique powers in them to build solutions to some of society’s toughest problems.